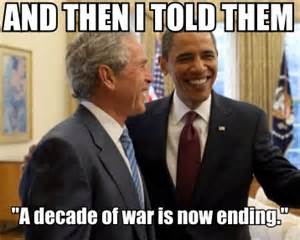 The White House announced Wednesday that 450 more American troops are being sent to Iraq as “trainers” and “advisers,” bringing the officially acknowledged US force there to over 3,500. The latest escalation of Washington’s renewed military intervention in a country decimated by the war and eight-year-long occupation begun in 2003 comes exactly one year after Iraq’s second-largest city, Mosul, fell to Islamist fighters of the Islamic State of Iraq and Syria (ISIS).

In the wake of that stunning debacle for US policy in the region-and, in the first instance, for the Iraqi national army, which the Pentagon had spent nearly a decade and over $20 billion to arm and train—the Obama administration launched its renewed US intervention in Iraq and Syria under the title “Operation Inherent Resolve.”

After nearly 10 months of US-led air strikes combined with the deployment of over 3,000 American troops to train and advise Iraqi government troops, these forces have shown little resolve, inherent or otherwise, melting away last month in the face of an ISIS assault on Ramadi, the capital of Anbar province, just as they had in June of last year in Mosul. Once again, massive quantities of US arms, vehicles and equipment fell into the hands of the Islamist guerrillas, effectively making them one of the largest recipients of American weaponry in the entire region.

Earlier this week, President Barack Obama made the startling admission at the G7 summit in Germany that “We don’t yet have a complete strategy,” while indicating that he was waiting for the top brass in the Pentagon and their counterparts in the US intelligence apparatus to tell him what it would be.

The problem with the US strategy is that it is beset with a host of glaring contradictions, not least of which is Washington’s desire to conduct its aggressive policy in the Middle East by means of drone murders, special operations death squads and local proxy forces, while engaging in a “pivot” of its main military might toward confrontation with its major geo-strategic rivals, Russia and China in particular.

While for this reason the Obama administration has been reluctant to deploy larger numbers of US ground troops in Iraq, the logic of events is drawing it into an ever-widening intervention.

In waging its war against ISIS, Washington resembles nothing so much as Dr. Frankenstein seeking to destroy the demon of his own creation. ISIS, which began as Al Qaeda in Iraq, emerged as a direct byproduct of the US invasion and devastation of Iraq, including the sectarian divisions deliberately stoked up between Sunnis and Shiites as part of a divide and rule strategy on the part of the American occupation forces.

Today’s ISIS took shape in the context of the US wars for regime-change launched first in Libya against the late Muammar Gaddafi, in the form of a US-NATO air campaign, and then in Syria, in the form of a proxy war for the overthrow of President Bashar al-Assad. In both cases, the US and its allies have relied heavily on the Islamist forces that comprise ISIS and similar Sunni sectarian militias.

Well after Washington was fully aware that the Syrian “rebels” consisted overwhelmingly of ISIS and Al Qaeda-linked elements (as a recently declassified secret US intelligence report from August 2012 makes clear), the CIA continued to coordinate the funneling of arms and funds, including from the Gulf oil monarchies, into their hands.

In promoting the Islamists in Syria, the US aimed to topple Assad as a means of weakening the closest allies of the Damascus regime, Iran and Russia. Now, in Iraq, it has effectively relied on Iranian-backed Shia militias to do the bulk of the fighting against ISIS, even as it verbally deplores their role.

The new deployment announced Wednesday will supposedly concentrate the latest contingent of “trainers” and “advisers” at a sprawling former US base in Anbar province, where they are to train Sunni forces and oversee a campaign to retake Ramadi and the rest of Anbar, which is largely under ISIS control.

This will only increase the drumbeat in Washington for an even more aggressive and direct US military intervention in the region, not only to defeat ISIS in Iraq, but also to complete the overthrow of Assad in Syria.

All of this is being carried out behind the backs of the American people, who are overwhelmingly hostile to war. The US Congress, which has avoided a vote on whether to authorize (after the fact) the use of military force, is directly complicit in an ongoing military intervention that is both unconstitutional and in violation of international law. The media does its part, concealing the far-reaching implications of American militarism while continuously hyping the supposed threat of terrorism in order to justify US military aggression.

The bellicose sentiments of the American ruling class found expression in the testimony delivered to a US Congressional panel last week by longtime Pentagon advisor Anthony Cordesman, of the Center for Strategic and International Studies, a Washington DC think tank.

“The US needs to act upon a key lesson from Vietnam,” Cordesman told Congress. “Generating or rebuilding forces in the rear is not enough, and is an almost certain recipe for failure. New or weak forces need forward deployed teams of advisors to help them actually fight.”

In other words, Iraqi government troops will fight only if they are led by US “advisors” sent into combat with them. One would think that the larger lesson of Vietnam is that such tactical remedies cannot overcome the underlying problem of getting an indigenous force to fight on behalf of a corrupt puppet regime imposed by US imperialism.

The second prescription provided by Cordesman is that the Pentagon cast off its “restrictions on the use of airpower” and accept the “grim realities of war.”

“The US cannot make avoiding all civilian casualties a strategic objective,” he insisted, adding, “There is nothing humanitarian about saving a small number of civilian lives and opening up whole towns and cities to prolonged occupation by threats” such as ISIS.

Given that reports compiled by independent journalists place the number of Iraqi and Syrian civilians killed in the air strikes conducted by the US and its allies at between 418 and 850, what Cordesman is advocating is a Vietnam-style slaughter from the air. He speaks for influential layers of the ruling establishment and the Pentagon that want a quick resolution of the crisis in Iraq so that they can turn their attention to the preparation of far more catastrophic wars against nuclear-armed Russia and China.