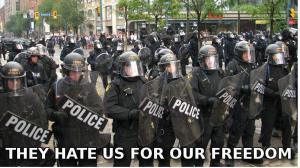 “Strange how paranoia can link up with reality now and then.” ― Philip K. Dick, A Scanner Darkly

Once upon a time, there was a nation of people who believed everything they were told by their government.

When the government waged costly preemptive wars on foreign countries, insisting it was necessary to protect the nation, the citizens believed it. And when the government brought the weapons and tactics of war home to use against the populace, claiming it was just a way to recycle old equipment, the people believed that too. The few who disagreed were labeled unpatriotic.

When the government spied on its own citizens, claiming they were looking for terrorists hiding among them, the people believed it. And when the government began tracking the citizenry’s movements, monitoring their spending, snooping on their social media, and surveying their habits—supposedly in an effort to make their lives more efficient—the people believed that, too. The few who disagreed were labeled paranoid.

When the government let private companies take over the prison industry and agreed to keep the jails full, justifying it as a cost-saving measure, the people believed them. And when the government started arresting and jailing people for minor infractions, claiming the only way to keep communities safe was to be tough on crime, the people believed that too. The few who disagreed were labeled soft on crime.

When the government hired crisis actors to take part in disaster drills, never alerting the public to which “disasters” were staged, the people genuinely believed they were under attack. And when the government insisted it needed greater powers to prevent such attacks from happening again, the people believed that too. The few who disagreed were told to shut up or leave the country.

Finally, the government started carrying out covert military drills around the country, insisting they were necessary to train the troops for foreign combat, and most of the people believed them. The few who disagreed, warning that perhaps all was not what it seemed, were dismissed as conspiracy theorists and quacks.

Now every fable has a moral, and the moral of this story is to beware of anyone who urges you to ignore your better instincts and trust the government.

For instance, while there is certainly no shortage of foul-smelling government activities taking place right now, the one giving off the greatest stench is Jade Helm 15. This covert, multi-agency, multi-state, eight-week military training exercise is set to take place from July 15 through Sept. 15 in states across the American Southwest.

The training is known as Realistic Military Training because it will be conducted outside of federal property. The exercises are going to be carried out on both public and private land, with the military reportedly asking permission of local authorities and landowners prior to land usage. The military map listing the locations that will host the exercise shows Texas, Utah, and the southern part of California as “hostile territory.” According to U.S. officials, these three areas are marked as hostile to simulate environments where American troops are viewed as the enemy. The other areas on the map are marked as permissive, uncertain (leaning friendly), or uncertain (leaning hostile).

Military officials claim that the southwestern states were chosen because this exercise requires large areas of undeveloped land as well as access to towns and population hubs. These states purportedly also provide a climate and terrain that is similar to that of potential areas of combat for the United States, particularly Iraq, Iran and Syria.

Now the mainstream media has happily regurgitated the government’s official explanation about Jade Helm. However, there is a growing concern among those who are not overly worried about being labeled conspiratorialists or paranoid that the government is using Jade Helm as a cover to institute martial law, bring about total population control, or carry out greater surveillance on the citizenry.

In the first camp are those who fear that Jade Helm will usher in martial law. These individuals believe that by designating the two traditionally conservative and Republican-dominated states, Utah and Texas, as hostile territory, while more Democratic states like Colorado and California are marked as friendly, the military plans to infiltrate the states with large numbers of gun owners and attempt to disarm them.

Adding fuel to the fire is the mysterious and sudden temporary closures of five Walmart stores in Texas, California, Oklahoma and Florida, two of which are located near Jade Helm training sites. Those in this camp contend that the military is planning to use the Walmart stores as processing facilities for Americans once martial law is enacted.

Pointing to the mission’s official title, “Jade Helm: Mastering the Human Domain,” there is a second camp that fears that the military exercises are merely a means to an end—namely total population control—by allowing the military to discern between friendly civilians and hostiles. This concern is reinforced by military documents stating that a major portion of Jade Helm training will be about blending in with civilians, understanding how to work with civilians, using these civilians to find enemy combatants, and then neutralizing the target.

In this way, the United States military is effectively using psychological warfare to learn how people function and how to control them.

As a study written by military personnel states, mastering the human domain, also known as identity processes, means “use of enhanced capabilities to identify and classify the human domain; to determine whether they are adversarial, friendly, neutral, or unknown.” The study later states that identity processes can be used to “manage local populations during major combat, stability, and humanitarian assistance and/or disaster relief operations.”

While the military has promised that the work they are doing is aimed for use overseas, we have seen first-hand how quickly the military’s weapons and tactics used overseas are brought home to be used against the populace. In fact, some of the nation’s evolutionary psychologists, demographers, sociologists, historians and anthropologists have been working with the Department of Defense’s Minerva Initiative to master the human domain. This security research includes “Understanding the Origin, Characteristics, and Implications of Mass Political Movements” at the University of Washington and “Who Does Not Become a Terrorist and Why?” at the Naval Academy Post Graduate School. Both studies focus on Americans and the different movements and patterns that the government can track to ensure “safety and security.”

The Department of Homeland Security (DHS) is also working to infiltrate churches across the country to establish a Christian Emergency Network, carry out emergency training exercises to prevent and prepare for disasters (active shooter drills and natural disaster preparedness), and foster two-way information sharing, while at the same time instituting a media blackout of their activities. As the DHS continues to establish itself within churches, a growing number of churches are adopting facial recognition systems to survey their congregations, identify and track who attends their events, and target individuals for financial contributions or further monitoring. As the partnership between churches and the DHS grows, their facial recognition databases may be shared with the federal government, if that is not already happening.

Finally, there is the third camp which fears that Jade Helm is merely the first of many exercises to be incorporated into regular American life so that the government can watch, study, and better understand how to control the masses. Certainly, psychological control techniques could be used in the future to halt protests and ensure that the nation runs “smoothly.”

It remains to be seen whether Jade Helm 15 proves to be a thinly veiled military plot to take over the country (one lifted straight out of director John Frankenheimer’s 1964 political thriller Seven Days in May), turn the population into automatons and psychological experiments, or is merely a “routine” exercise for troops, albeit a blatantly intimidating flexing of the military’s muscles.

However, as I point out in my book Battlefield America: The War on the American People, the problem arises when you add Jade Helm to the list of other troubling developments that have taken place over the past 30 years or more: the expansion of the military industrial complex and its influence in Washington DC, the rampant surveillance, the corporate-funded elections and revolving door between lobbyists and elected officials, the militarized police, the loss of our freedoms, the injustice of the courts, the privatized prisons, the school lockdowns, the roadside strip searches, the military drills on domestic soil, the fusion centers and the simultaneous fusing of every branch of law enforcement (federal, state and local), the stockpiling of ammunition by various government agencies, the active shooter drills that are indistinguishable from actual crises, the economy flirting with near collapse, the growing social unrest, the socio-psychological experiments being carried out by government agencies, etc.

Suddenly, the overall picture seems that much more sinister. Clearly, there’s a larger agenda at work here, and it’s one the American people had better clue into before it’s too late to do anything about it.

Call me paranoid, but I think we’d better take James Madison’s advice and “take alarm at the first experiment on our liberties.”

10 thoughts on “Jade Helm, Terrorist Attacks, Surveillance and Other Fairy Tales for a Gullible Nation”